Press enter to begin your search

Looking after your fish for catch and release

Poole skipper, Steve Porter, gives us some tips on how best to treat fish you are planning to return to the water.

In the March edition of Saltwater Boat Angling, David Mitchell wrote about the new scientific report concerning the post-release mortality (PRM) of bass. You can read the full report online.

The report concluded that an impressive ninety-five percent of bass released by recreational sea anglers are likely to survive. This report is good news and is probably the reason why, in the short term, we have been allowed to continue to catch bass on a catch-and-release basis. You may recall that there was a move to ban us completely from targeting bass. The report may even pave the way to a reintroduction of a bag limit in the near future.

As the skipper of the charter boat, Trueblue, the report backs up what I already believed. We have practiced catch-and-release of many species, particularly bass, for a number of years, and, in almost every case, I see the fish swim healthily away. There are, however, a few exceptions. Sometimes I notice anglers, who have the best intentions to release their catch, but through lack of experience or knowledge, treat a fish in such a way, that it is unlikely to survive. As David Mitchell points out, the PRM of other species might also become the subject of scientific interest, so it’s worth highlighting here a few of the common mistakes that I have seen anglers occasionally make. Maybe with even better good practices for catch-and-release, we can demonstrate a higher PRM, which will certainly add to the reputation of the recreational sea angling sector. 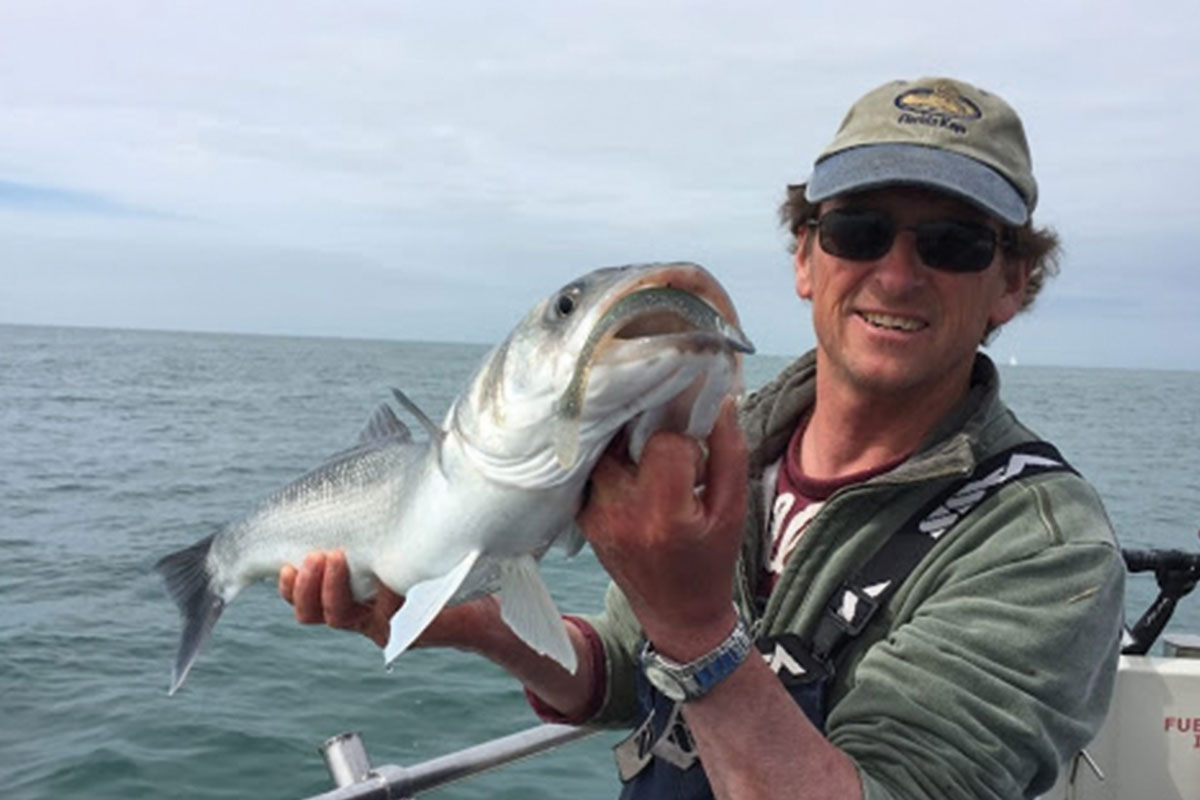 It can be great to get a photo of that special catch, but to do so can sometimes seal the fate of the fish. The most common mistake anglers make is to lay a fish on the deck. The deck can be very hot, especially in the summer. Try walking on it barefooted. It is often too hot even for us. If a fish must be placed on the deck, then ensure it is cooled first with running water and then continue to hose the catch, and the deck, while the fish is being handled. On Trueblue most fish are retained in the net, which rests on the gunnel, so fish rarely come into contact with any part of the boat. Many fish are simply T-bared off at the side of the boat, so they never even leave the water. Good practices unless you want a photo, or to record the weight of your catch.

How often do you see anglers hooking a fish in the gills or a ray in the mouth with the hook of the weighing scales? The problem is, these parts of a fish were never designed to take the weight of its body. Weighing a fish, particularly a large one, in this way, will cause serious damage to it. A good practice is to have a net bag for larger fish, or even a plastic carrier bag for smaller fish, which supports the weight of the fish as it is being weighed.

This has to be the single biggest area where anglers can improve the chances of survival for a released fish. Most anglers can deal with fish that are lip hooked.  Careful handling and a quick release with minimum contact will almost always ensure they survive. But, what about those deep-hooked fish? Some anglers, however well-meaning, dig and poke deep into a fish’s mouth, some even resorting to a so-called twizzle stick to remove the fish. The fish plops into the sea, shows a bit of movement as it fades from sight and an angler’s conscience is clear, ‘It’ll be alright,’ I hear many of them say.

The thing is, it probably won’t be all right. Twizzle sticks, although a very effective and quick way of removing a hook, do it by ripping the hook from the fish, almost always severing a gill-raker in the process. No fish is going to survive this. Digging deep into a fish’s mouth with fingers or forceps, trying to get leverage by bending the head of the fish to one side, is also not going to aid survival.

Unhooking a deep-hooked fish can be surprisingly easy using the right technique and, if done carefully, will give any fish the best chances of survival. The following photos show the technique we have learned on Trueblue. In this case, it shows the removal of a hook deep inside a plaice, but the technique works for most other species too.

2. Gently push the forceps right through and out of the mouth. At this point, you are not looking for the hook.

3. Once the forceps are through, take hold of the line.

4. Gently pull the line back through the fish and out of the gill cover. The hook will usually turn easily. If it doesn’t turn easily, then do not force it. It simply means that the hook is on the other side of the mouth, or in the case of flatfish, in the underside. Pull the line back out of the mouth and repeat the process of pulling it back through from the underside or other side. In this picture, you can see the shank of the turned hook.

5. A gentle push in the direction of the hook shank usually allows the hook to pass freely out of the fish’s mouth.

6. With the bend of the hook now out of the mouth, gently pull it clear.

7. The end result is a healthy-looking plaice ready for release and not a drop of blood. For any fish, big or small, always consider going in through the gill to remove a hook. A fish has three holes in its head. In the case of a deep-hooked fish, the mouth is often the furthest of these from the hook. Why then make things hard for you and the fish by limiting your unhooking attempts to the mouth.

The above is just a taste of what we can do to help ensure a high survival rate of fish. Other measures include hook choice. Circle hooks that nearly always ensure fish are lip hooked are many anglers’ first choice. They are, of course, harder to deal with on those rare deep-hooking scenarios.

We don’t know what the future holds for us anglers, but we know it is likely to be more restrictive. That’s not a bad thing if it is managed correctly, but when the time comes, we anglers just need to be given a fair share of the spoils. I believe that demonstrating good practices now will serve us well for whatever the future might bring.

Sea Angling Classis is brought to you by Angling Spirit: promoting angling in a responsible manner and organising / staging events with the betterment of angling as the focus.

Other events organised by Angling Spirit:

This website uses cookies to improve your experience while you navigate through the website. Out of these, the cookies that are categorized as necessary are stored on your browser as they are essential for the working of basic functionalities of the website. We also use third-party cookies that help us analyze and understand how you use this website. These cookies will be stored in your browser only with your consent. You also have the option to opt-out of these cookies. But opting out of some of these cookies may affect your browsing experience.
Necessary Always Enabled
Necessary cookies are absolutely essential for the website to function properly. This category only includes cookies that ensures basic functionalities and security features of the website. These cookies do not store any personal information.
Non-necessary
Any cookies that may not be particularly necessary for the website to function and is used specifically to collect user personal data via analytics, ads, other embedded contents are termed as non-necessary cookies. It is mandatory to procure user consent prior to running these cookies on your website.
SAVE & ACCEPT